Houston’s Fifth Ward comprises of a 6.25 square mile (16.2 square kilometer) low density residential area directly adjacent to Houston’s central business district. Its population of 50,000 has a median income of approximately half the average income for greater Houston, making it the poorest neighborhood in the city. The rapid dilapidation of building stock in the area indicates a dire need for new housing. Redevelopment at the scale of the individual house, however, is not a viable solution. It is the most expensive method of construction, and the rate of dilapidation far exceeds the currently manageable house-by-house replacement rate.  Furthermore, low-density proposals are neither an environmentally responsible nor economically practical approach to city planning. These findings suggest that future planning efforts will need to focus on high-density schemes implemented at a larger scale in order to achieve a comprehensive and sustainable solution for Houston.

Inner City New Town is a redevelopment proposal outlining a 50-year densification plan for the entire Fifth Ward. The scheme presented here is one of multiple possible solutions developed by the studio teams. Each is designed to operate at multiple scales, classified as superblock, district, sector, and ward.  These classifications introduce planning flexibility by allowing for a variegated plan with interchangeable pieces from each scheme. The variegation yields many possible combinations for systematic densification, accommodating for changes in building practice and community sentiment over the 50-year timeline.

This particular scheme organizes the city through a series of bands at the local district scale. Each band color represents commercial, residential, industrial, and civic programs; the primary programs are determined by sector. The white strips represent unbuilt land intended to saturate the Fifth Ward with a variety of landscapes and vegetation. Overall, the scheme produces a fabric with a unifying grain at the district and sector scales, while forming a network of open space across the entire Ward.

This project offers an alternative to single-use zoning. Each sector is assigned a primary program, informed in part by the existing condition of the neighborhood. Embedded within each district is a nucleus – a programmatic interruption designed to pull together surrounding activity. One of the primary concerns for the studio was the ability for each scheme to produce communities within the larger system; in this case, communities are defined as areas with a common center, as defined by a set of discrete urban artifacts.

The Fifth Ward is a stress nexus between economy, society, and environment. Ultimately the Inner City New Town model hopes to address a key issue facing every major city in the United States today – namely, the need to manage redevelopment of derelict neighborhoods in ways that respond to prevalent urban conditions. 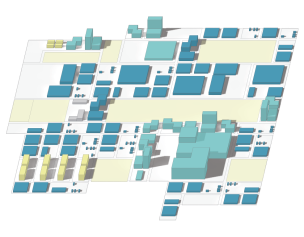 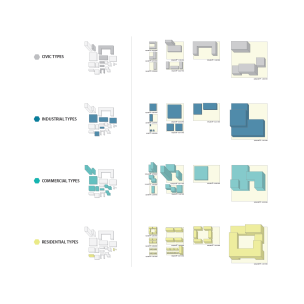 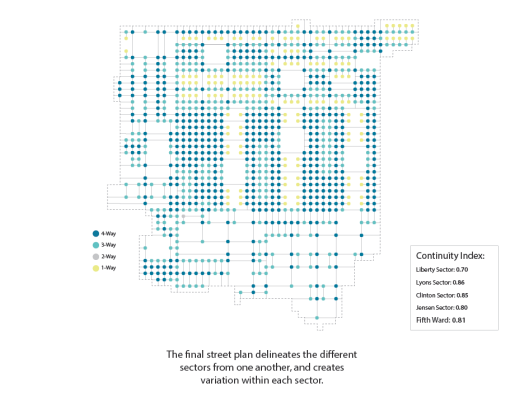 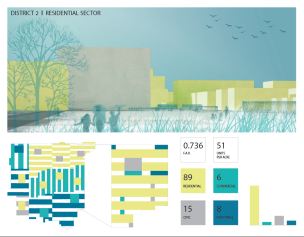