In collaboration with the National Park Service and the Van Allen Institute Parks for the People initiative, the studio developed proposals for a much-needed visitor’s center at Valles Caldera National Preserve. The project is situated in the heart of the Jemez Mountains in New Mexico, on the edge of a volcanic formation known as the Valles Caldera. A crater roughly 22.0 kilometers wide, the Caldera is a unique geological feature in North America. This single event shaped the landscape of the Caldera as we know it today – fertile volcanic soil with beautiful striations of rock recognized locally as Banco Bonito obsidian, El Cajete pumice, and South Mountain rhyolite.

Today, the Valles Caldera National Preserve offers a broad range of activities such as hiking, snow-shoeing, and hunting. Each activity is structured in such a way as to prioritize respect for the land, both ecologically and culturally. The area is of spiritual significance to the regional Native cultures and plays host a diverse range of flora and fauna; elk, in particular, frequent the area. The park management’s reverence for the region’s natural history made a profound impression on the team when we visited the site. In order to maintain an emphasis on the natural landscape while still referencing the park’s land stewardship philosophy, the formal language of excavation – informed by the layers of obsidian and pumice throughout the site – generates the space of the visitor’s center.

The site is situated along the southern rim of the Caldera on top of a small hill overlooking the crater. The project is thus heavily influenced by the boundary between the man-made and the natural environment. Spatially, this threshold is loosely defined. The volume itself is submerged into the hillside. Rather than regarding the building envelope as a weatherproof skin, the deep carving technique generates a thickened interface which allows for the exterior to invade the building volume. The walls of the building are constructed out of rammed earth, which creates a homogenous poche between the building and the ground. The result is an architecture which integrates the natural and the man-made into a single entity. 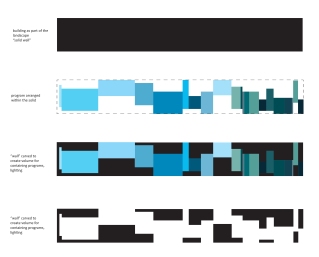 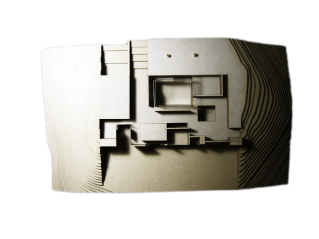